Considering the parallels between Victor Frankenstein’s notions of the consequences of “unlawful pursuits” and William Godwin’s stance on war (from Of the Causes of War), the two stories share similar concepts of consequences. Consequences such as going to war and dealing with injuries or losing someone close to you that you have known forever or felt like you’ve known them your entire life. In the two stories, people go through some rough times that can tear a multitude of individuals down such as the story “From Of the Causes of War” the soldiers who sacrifice themselves for us and for our country and risk losing one of their team members who have become like brothers/sisters to them or as in “Frankenstein” how Justine loses her mother. 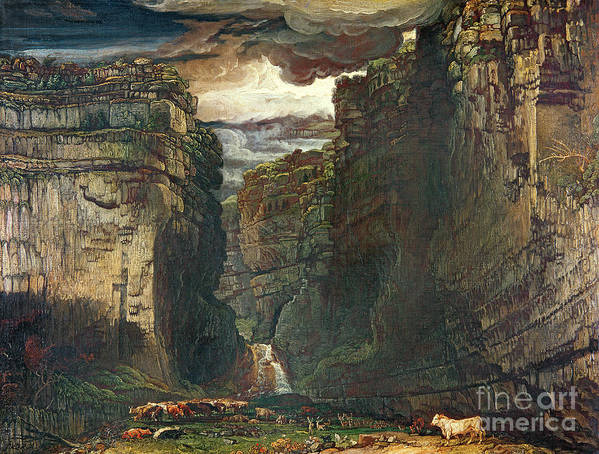 “Gordale Scar” by James Ward, is a piece of artwork that has a bunch of animals in a valley. These animals are all herded together, some standing up and some laying down. There is a waterfall toward the front of the animals. There is a variation of animals from cows, deer, birds and many more. The dark storm cloud indicates that a storm may be coming upon them or has already passed through. The text I relate this to is “The Daemon Lover” which in the title is the word lover. In most, if not all, of life there are down times, whether it be of love, death, or any other cause of life. The artwork and the text relate because the animals look like there going through a rough time, which is also heard as going through a valley.

The school, written by Donald Barthelme, was one of the best short stories I’ve ever read. Although the beginning of the story was kind of terrible, the ending, or close toward the ending turned the story around to where it wasn’t terrible.

Donald Barthelme’s short story was starting off terrible with the quote, “We were thinking that way probably before that the gerbils had died, and the white mice had died, and the salamander…well, now they know not to carry them around in plastic bags”(par. 3 ). Basically every animal they had died. Even the puppy they weren’t even supposed to have died.

Then toward the end of the short story, things flipped around. The kids wanted to know what love was. They wanted the teacher to make love to the teaching assistant to see how it was supposed to happen. The teacher and teacher assistant showed the class the scene, “Helen came and embraced me. I kissed her a few times on the brow. We held each other. The children were excited”(par. 11). Then when things got heated for the children, a gerbil walks in the classroom and that’s the end of the story.

In “The School”, Donald Barthelme does a good job of walking the reader through the story. He starts out by writing about the terrible things that happened and then goes toward the end with a happy ending. Donald Barthelme’s story was one of the best short stories that I’ve ever read.

One regular morning for the people of New York City, on September 11th, 2001, suddenly changed. People were burnt alive, jumping out of the Twin Towers, and suffocating from all the smoke that was caused. One man in particular, jumped out and was head first and there was a picture taken and the man got the name “The Falling Man” because of the photograph.

At first it was just thought of as an accident until it had struck once again. The Twin Towers, both the north and the south, were hit by planes. After the second plane had struck, the people of New York City, as well as the whole United Nation, thought that America was under attack. The entire morning and much after that was just a complete tragedy. The United States was in severe shock from that point forward. Later on before both of the buildings had made their way down, human individuals were ending their lives right then and there by jumping out of the Twin Towers instead of burning or suffocating to death. The people in the Twin Towers were brave on September 11th, 2001, as well as the rescue squads that came to help the morning of the tragedy.

There was the man named “The Falling Man” because of a photograph taken of him going head first plummeting straight to the ground. Richard Drew, the photographer, described “the falling man” as he entered his final seconds of his life. Drew’s description was that the man “appears relaxed, hurtling through the air”, which shows that people that day in the Towers were extremely brave. Drew also describes the man to be wearing a “white shirt, or jacket, or frock, is billowing free of his black pants. His black high-tops are still on his feet.” Drew explains that everyone else that had jumped that day seemed as if they were “struggling against horrific discrepancies of scale.”  Most individuals in that situation would’ve done like most people and struggled with falling to their death, but the falling man wasn’t that way. The falling man was one of the bravest individuals that day because of the way he had fallen to his death in a calm manner.

One regular morning could dramatically change with a tragedy awaiting. The tragedy could be the same as it was on September 11th, 2001, or something totally different. Whatever it may be, the question is “Would you want to suffer from burning and suffocating or end your life right then?”

Hi my name is Justin Millsaps, people just call me Justin. The life I live now doing chicken houses, helping raise cattle, riding horses, and just spending time with the family are things I enjoy the most in life. My number one interest in the list is riding and being around horses. Horses can be your best friend or your worst enemy, and trust me I’ve had my share of those kinda horses and it ain’t fun. Horses are fun to be with and all around just one of the most beautiful animals of God’s creation. Before my papaw passed a little over 9 years ago, we would, after I got all my work done, go saddle up and just ride for hours and hours. Horses are a big part of my life and will always be forever.

Thanks for joining me!